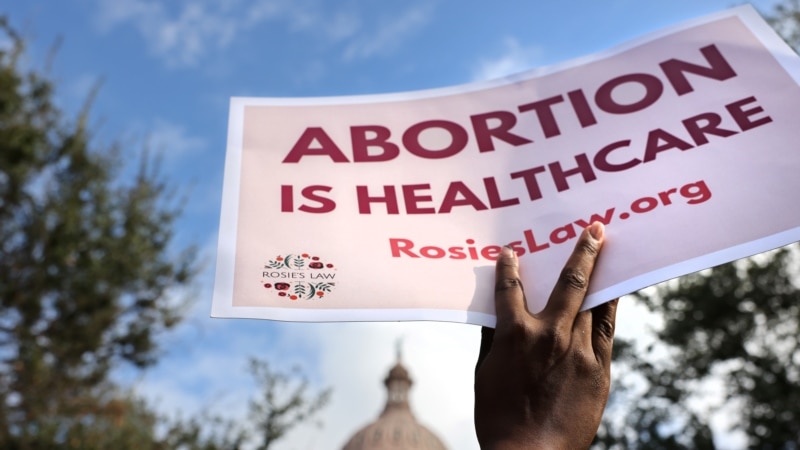 A Texas abortion law that was signed in May by Governor Greg Abbott is considered the most restrictive abortion legislation in the country. After the Supreme Court voted 5-4 in September to at least temporarily uphold the law, the court once again will hear arguments regarding the case on Monday.

Texans across the state, meanwhile, are vigorously debating the new law themselves.

“It obviously violates Roe v. Wade,” said Rose MacKenzie, a San Antonio resident and musician in the U.S. Air Force Band. “It’s restrictive to women who need care when we should actually have control over our body, well-being, and quality of life.”

While a poll conducted this month by The Hobby School of Public Affairs at the University of Houston found 69% of Texans believe the law is too restrictive, only 45% said they opposed it. Many residents said they still supported the law despite preferring, for example, that it included exceptions in cases of rape and incest.

“Abortions just feel so horrific and wrong,” said Danielle McCormick, also from San Antonio. “If nothing else, the new law will keep more children safe from voluntary termination.”

While Monday’s arguments are focused on the structure of the Texas law, it could kick off one of the most important months for abortion-related legislation at the Supreme Court in 50 years. This stretch will culminate when the justices hear another abortion case, this one from Mississippi, on Dec. 1, that could challenge the landmark Roe v. Wade decision, which has acted as the legal precedent for all abortion laws in the United States since 1973.

For decades, Texas — where the Roe v. Wade case originated — has been near the focal point of contentious abortion debates. The issue hasn’t always been so polarizing, however. Even the Roman Catholic Church, now one of the most adamant abortion opponents, decided in the 13th century that abortion should be allowed until approximately 16 weeks into pregnancy, when the movement of the fetus could be detected.

That view held until 1869, when Pope Pius IX wrote that any woman who had an abortion would be censured. In 1917 the church clarified its stance and eliminated the distinction between early- and late-term abortions by prohibiting all abortions from the moment of conception.

For more than a century, changes in U.S. abortion law roughly shifted in sync with the church’s opinion. Connecticut was the first state to place restrictions on abortion, criminalizing them in certain situations in 1821. By 1900, every state had abortion legislation.

Delivering the opinion of the court in the case of Roe v. Wade, Justice Harry Blackburn noted, “the restrictive criminal abortion laws in effect in a majority of States today are of relatively recent vintage.” He also wrote of the “seemingly absolute convictions” that abortion inspires, but those convictions have only become more absolute — particularly among lawmakers — in the decades since the landmark case.

While the Roe v. Wade decision set the precedent of protecting the right to an abortion until approximately 24 weeks into a pregnancy, or when the fetus could survive outside the womb, the new Texas law draws the line at six weeks, when the fetal heartbeat can be detected.

It’s the first law in the United States to set such an early limit. Experts like Mary Ziegler, a legal historian and professor of law at Florida State University, acknowledge this is in contradiction to the legal precedent set in the past, but also believes that’s being done intentionally.

“They’re trying to run out the clock,” she explained. “Republicans are banking that soon enough Roe v. Wade will no longer be the law of the land. With this law they’re trying to stop as many abortions as they can until that happens.”

“The law is written in a way that’s been very difficult to successfully challenge,” Ziegler said, “and until it is challenged, abortions in Texas have come to a virtual halt.”

Abortion providers in the state have said, since the law took effect in early September, at least 80% of abortions previously provided are now prohibited. This forces patients to continue an unwanted pregnancy, to drive to neighboring states for an abortion, or to pursue more dangerous methods.

Texas Republicans have accomplished this by creating a law that leaves enforcement to private citizens rather than to the state itself. Under the new legislation, a citizen can sue anyone who performs an illegal abortion or who facilitates one (by, for example, driving a patient to a clinic) for a minimum of $10,000 in statutory damages.

“Monday’s hearing is very important even though it’s not specifically about the law’s position on abortion,” Ziegler said. “If the Supreme Court decides to allow the law to continue — even if it ultimately gets stricken down in the future — then states will see they can have some success temporarily passing laws with this type of procedure.”

Ziegler suggested other states might use this method to, for example, temporarily halt the sale of guns or to restrict voting. This, she said, could have real consequences.

“We’ve seen in the past that when an abortion clinic is forced to close because a law changes, they aren’t always able to reopen for financial reasons. Even if the law is overturned, getting an abortion will likely be more difficult for Texas women because it was passed.”

Ziegler also believes the unique way in which Texas Republicans designed the law could affect how some Texas residents define their views on abortion.

“Americans’ abortion views on when they believe life begins or if they think exceptions should be made in the case of rape don’t actually change much over time,” she told VOA, “but what does change is whether people classify themselves as pro-life or pro-choice. That tends to shift based on what the two sides have done lately. A lot of Texans — even Republicans — seem to have issues with how this law pits citizens against each other for enforcement. It might be seen as overreach.”

“It’s called the ‘Mushy Middle’ and that’s where most Americans, including Texans, sit,” Ziegler said. “If voters perceive one side is pushing too far in one direction, public opinion might move against them.”

Kimberly Malloy is an example of this. A resident of San Antonio, Malloy said in some ways she’s pro-life, but admitted she also takes issue with many aspects of the new law.

“I think if a woman has to have an abortion, it should be done in the first 10 weeks of the pregnancy,” she explained, “but I don’t see how six weeks is fair. Most women don’t even know they’re pregnant then, and they still need time to schedule the abortion. Also, how can you expect a woman to keep a child in the case of rape? They didn’t even consent to sex. It’s crazy.”

Ziegler said what’s considered legal and illegal when it comes to abortions could soon be redefined.

“It’s a very important month,” she said, “and it starts on Monday.”