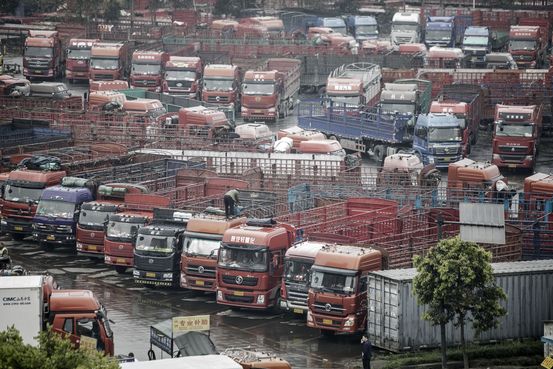 and an online recruiting app owned by

Both companies went public in the U.S. in June. Like Didi, they were ordered to stop adding users while the probes are conducted.

On Monday, China’s Cybersecurity Review Office, which falls under the Cyberspace Administration of China, said it had begun a data-security investigation into the apps Yunmanman, Huochebang and Boss Zhipin. It said the review is aimed at preventing national data-security risks, maintaining national security and protecting public interests.

, whose Vision Fund owns stakes in Didi Global and Full Truck Alliance, fell 5.3% in Monday trading on the Tokyo Stock Exchange. The Hang Seng tech index, a gauge of Hong Kong-listed technology stocks that is dominated by large Chinese companies such as

Didi raised $4.4 billion in its initial public offering last week, while Full Truck Alliance raised $1.6 billion and Kanzhun raised $912 million earlier in June, according to regulatory filings. Prices of their American depositary receipts all rose above their IPO prices upon their trading debuts, though Didi’s New York-listed securities dropped 5.3%on Friday after the recent regulatory action.

Full Truck Alliance, also known as Manbang Group, provides Uber-like services for China’s trucking industry and was formed in 2017 from the merger of Yunmanman and Huochebang. The two digital platforms connect millions of truckers with companies that need to ship a variety of goods.

Its shares started trading on the New York Stock Exchange on June 22. As of Friday, Full Truck Alliance had a market capitalization of about $20.65 billion. The company is based in Guiyang, in the southwestern province of Guizhou. Aside from SoftBank’s Vision Fund, its high-profile investors include Sequoia Capital China and Tencent.

Before it went public, Full Truck Alliance’s listing prospectus said the company was asked to share details with Chinese regulators on issues such as user protection, pricing and competition. It had warned that “there is no guarantee that such regulatory communications would not result in substantial penalties or orders” that could affect the company’s operations and growth prospects.

In May, Full Truck Alliance and Didi were among 10 transportation-technology companies that were summoned to a joint meeting with officials from eight Chinese ministries and agencies. The authorities discussed the companies’ arrangements with drivers, and their pricing and handling of freight information. They told the firms to rectify issues that had sparked public concerns.

Kanzhun, which is based in Beijing and counts Tencent among its shareholders, started trading on the Nasdaq Stock Market on June 11. The seven-year-old company operates Boss Zhipin—a mobile app that connects job seekers with employers and recruiting professionals, and describes itself as China’s largest online recruitment platform, with around 25 million monthly active users as of March.

The company also previously warned of potential regulatory action from Chinese authorities that could negatively affect its business. Such disclosures are relatively common for technology companies based in China.

Didi said Friday that it would fully cooperate with the cybersecurity review. Over the weekend, Chinese authorities ordered app store operators in the country to remove the mobile app for Didi’s China service. The company said its existing customers who had already downloaded the app wouldn’t be affected.