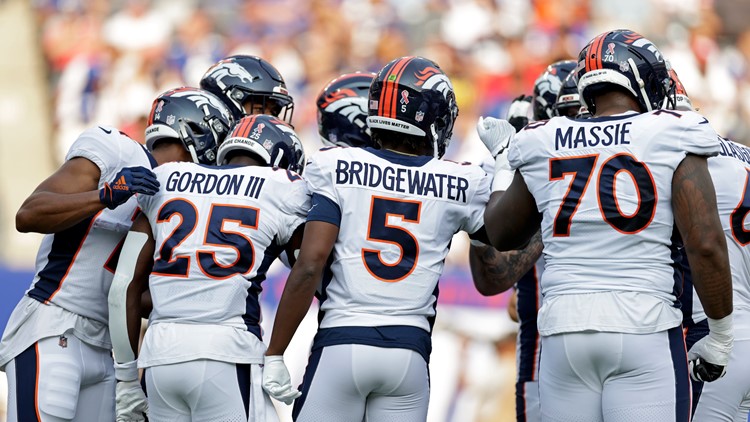 It should help that this is the first game the Broncos can play with nothing to lose against Von Miller’s hometown team.

ENGLEWOOD, Colo. — For the first time since Eric Studesville was their head coach and Chris Kuper was their starting right guard, life without Von Miller begins for the Denver Broncos.

In the final month of a disastrous 2010 season, Studesville was the Broncos’ interim head coach in place of the fired Josh McDaniels and Kuper was learning the tricks of his blocking trade that would one day make him the Broncos’ current assistant offensive line coach.

The following April, the Broncos used their No. 2 overall draft pick on Miller, an outside linebacker from Texas A&M. Miller would play 10 ½ seasons for the Broncos, record 117 sacks (counting the postseason), make eight Pro Bowls and earn a Super Bowl 50 MVP award. The Broncos awarded his Hall of Fame-caliber performance by making him the richest defensive player in NFL history for a time with a six-year, $114.5 million contract – the last $9 million of which will be paid while he finishes out the final three months of that deal with the Los Angeles Rams.

To play their first game without Miller, the Broncos take on his hometown team, the Dallas Cowboys this Sunday at AT&T Stadium. The Broncos are the biggest underdog of the remaining NFL schedule this week as the Cowboys are a 10-point favorites for the game that kicks off at 11 a.m. MST.

Unlikely as it may be for the 4-4 Broncos to win this game against the 6-1 Cowboys, bigger upsets have happened. Here’s how the Broncos can pull off the shocker:

It’s the Broncos’ best, and maybe their only shot. Vic Fangio’s coverage disguises have been known to frustrate the very best of quarterbacks for a half or so. Cowboys quarterback Dak Prescott hasn’t played in three weeks because of a calf injury and a bye week so he may be rusty. If he can throw a pass or two to a Broncos white jersey, Denver can keep it close.

In their past two games against Cleveland and Washington, Denver’s D allowed a combined 294 rushing yards on 57 carries, a 5.2 yard-per-carry clip. All those rushing yards have resulted in too much break in the defense – and only eight offensive possessions for the Broncos in each of the past two games. It’s difficult for the offense to get in a rhythm when its on the sidelines waiting 6 to 8 minutes of game clock for the defense to get off the field.

It won’t be easy stopping the run in this game as the Cowboys have two good running backs in Ezekiel Elliott and Tony Pollard, who have already combined for 963 yards rushing through seven games on 5.2 yards per carry.

The Dallas D is tough against the run this season, allowing just 88.3 yards per game to rank No. 6 in the NFL. So the only way to get Melvin Gordon III and Javonte Williams going is to loosen up the box by opening up the passing game. Washington squeezed the short-area passing routes last week, so Bridgewater and his receivers will have to hit some intermediate routes early in this game.

Tom McMahon’s unit is suddenly hot after blocking two field goals last week against Washington. Now for a touchdown return either from Diontae Spencer or, if he doesn’t dress again this week, Kendall Hinton or Tyrie Cleveland. Hey, the Broncos are deemed 10-point underdogs. They’ll need something unusual to pull this off.

5. Play with nothing to lose

This may be the first game where Broncos Country doesn’t expect their team to win. The Cowboys, in turn, are supposed to name their own score. If the Broncos can hang in for a half or so, they tighten the chinstraps on the Cowboys, who are due for a B game performance after winning six in a row, including last week with backup quarterback Cooper Rush. The Broncos can have fun and let it loose.

RELATED: Broncos notes: Fant, Bolles won’t play vs. Cowboys and Reed may be out, too